Dangote: Nigeria to Save $2.5bn Annually from Petrochemical, Fertiliser Plants

Oil has jumped back above $65 a barrel in London as supply disruptions in Iraq and Libya reignited concerns over the market’s vulnerability to geopolitical risk in key production regions.

Futures rose more than 1.7% in London and New York. Iraq temporarily stopped output at an oil field on Sunday, with supply from a second site threatened as unrest escalates in OPEC’s second-biggest producer. In Libya, National Oil Corp. declared force majeure after Commander Khalifa Haftar blocked exports at ports under his control. 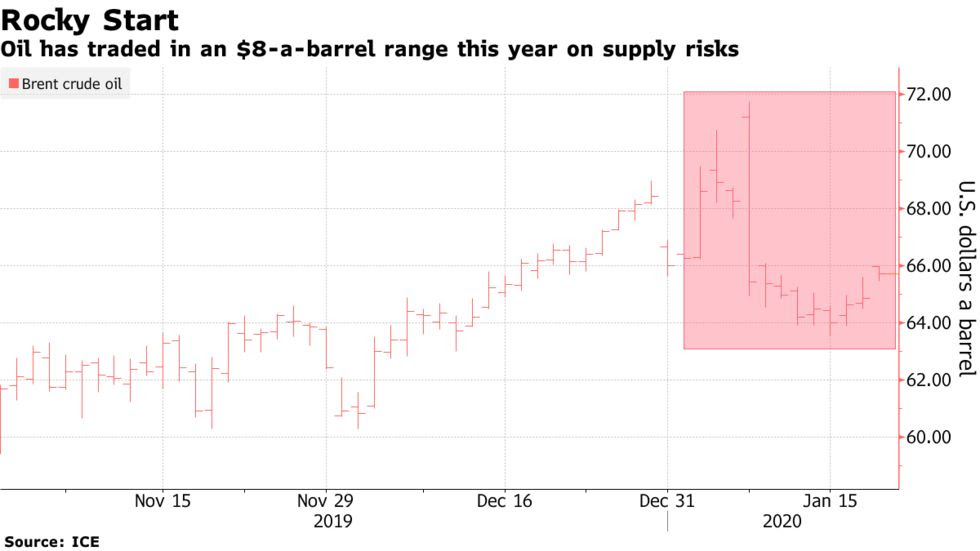 The double-whammy of disruptions in two key producers has jolted focus back to supply risks as oil markets continue their dramatic start to the year. Brent crude has swung in an $8-a-barrel trading range as initial fears that the U.S. killing of a top Iranian general threatened Middle East exports gave way to confidence that the world had an adequate supply cushion.

The spike in oil prices is a rational response to the news on Libya and reflect the jumpy nature of the market, but the temporary stoppage of production in Iraq is more significant, said Michael McCarthy, chief market strategist at CMC Markets in Sydney. The $60 mark for West Texas Intermediate is providing “pretty solid resistance,” he added.

Security guards in Iraq seeking permanent employment contracts blocked access to the Al Ahdab oil field, prompting a production halt, according to an official who couldn’t be identified. The Badra field is also at risk of closure. In Libya, output will fall by about 800,000 barrels a day, according to NOC.